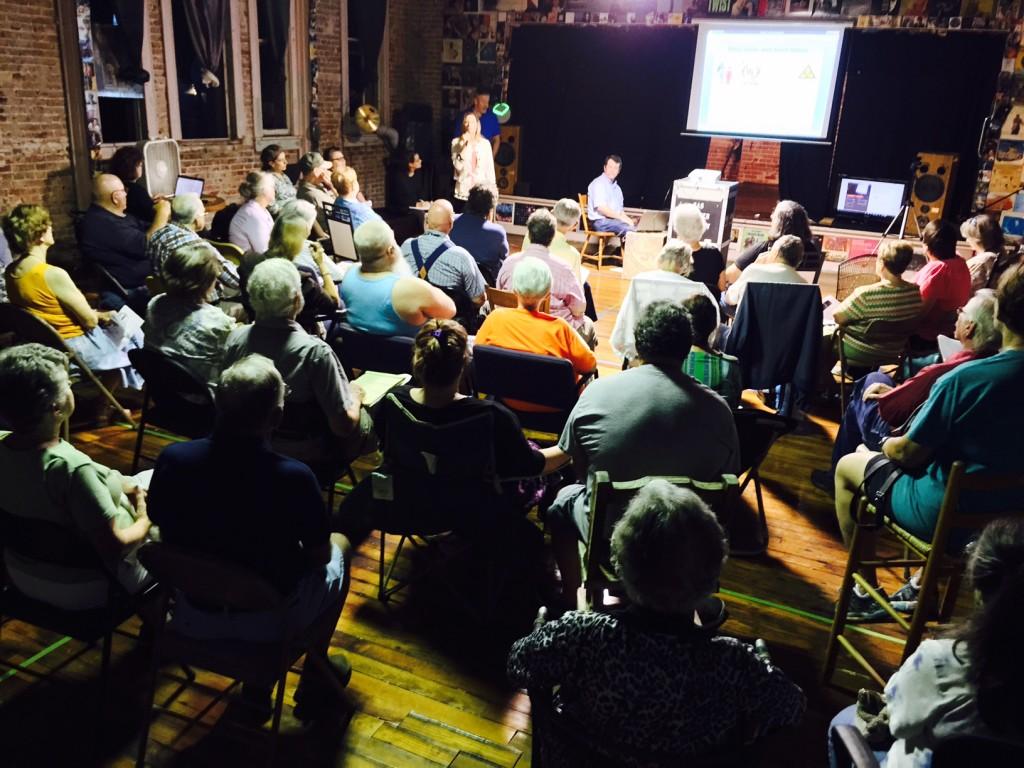 SMITHVILLE, TX— Smithville is a small town of about 3800 residents in central Texas, about 40 miles southeast of Austin and about 100 miles northeast of San Antonio. It’s not just the town’s name – even residents say Smithville is a fairly ordinary small town and typical of “middle America” with a Main St. where everyone knows each another. A community meeting there last November that presented information about smart meters ignited debate and participation, galvanized the town to action, and generally shook politics up in a good way, according to residents.

Some background: About a year ago, the Smithville city council signed a “revenue neutral” contract with energy company Ameresco to replace all the analog water and electric meters in town with “smart” wireless meters and install LED streetlights (which have their own set of problems). Residents were informed of an “infrastructure upgrade” but few were aware of the implications and potential problems.
Jim Keller, a photographer and property owner in Smithville, and Kelly Holt, an investigative journalist running for the Smithville City Council, were aware of these problems and knew they had to act in order to bring critical information about the risks to the town’s attention. Acting on an ad hoc, independent basis, the two organized a community meeting to discuss the smart meter issue, and brought in experts. Jim Keller tells us that prior to the meeting, “I don’t think city staff or the meter manufacturers ever expected a backlash here in Smithville.”
Keller and Holt sent a mailer out to 2174 households in town on October 31st (using USPS Every Door Direct Mail) with facts about security and fire risks, inviting everyone to a community meeting to discuss smart meters on November 5th. They hoped a few people would turn out to have a discussion, but were not prepared for the response.
Neither were the city council nor Ameresco, who had simply considered the metering/ streetlight projects a mundane and routine “infrastructure upgrade.”

On the evening of November 5th 2015, more than 110 residents packed into an old school auditorium in the center of Smithville. The crowd included 4 of 5 city council members and 2 officials from Ameresco. Many were taken aback by the size of the crowd, including one of Ameresco’s staff who was reportedly appeared to be in shock at the number of people gathered to hear about the problems with the company’s products.

Speakers at the event included Sheila Hemphill of Texans Against Smart Meters and Laura Pressley of Austin Smart Meters.
No mention was made of the health effects of microwaves in the mailer, but the audience was passionately interested and the presenters delivered detailed information on current medical research and EMF exposure guidelines as they relate to the safety of exposure to smart meters. When moderator Jim Keller notified Sheila Hemphill that her time was up, a person in the audience yelled, “let her speak!” People were riveted to the presentations and hungry for more information on the topic. Several people shared specific concerns about health impacts from wireless technologies, including the interference problems with pacemakers.