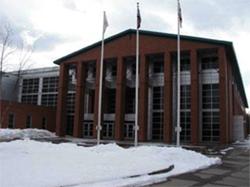 Below is a data plot of peak WiFi exposures experienced by a teacher and students at the North Kingstown, RI High School over two days, February 24, 2016 and February 26, 2016. The exposures resulted in the 9th Grade Math Teacher, Shelley MacDonald, experiencing migraines, brain fog, headaches and a throbbing head. When the teacher left school, the exposures and the symptoms stopped.

High School in North Kingstown Rhode Island
Ms. McDonald has appealed to the school administrators to consider the effect of WiFi at the school, but instead of genuine attention being paid to this matter, she has faced Administrators who say they are powerless to do anything and must defer to the position of the R.I. Department of Health, which relies on flawed FCC Radiofrequency exposure guidelines.
For those not familiar with these guidelines, the FCC exposure guidelines only consider one form of risk from wireless radiation, the thermal effects of the radiation. This, in effect, protects the commercial interests of the wireless industry, as if the non-thermal risks were considered, that would mean many electronic products—like school Wi-Fi routers—would not be considered safe and have to come off the market. Non-thermal effects (i.e. non-heating) include the effects of frequencies, the pulsing and peaks, and the cumulative and long-term effects. It’s not surprisingly the FCC is in effect turning a blind eye to the non-thermal effects as wireless industry insiders, like its Chairman Tom Wheeler, are in charge.

See the Harvard University report “Captured Agency: How the Federal Communications Commission is Dominated by the Industries it Presumably Regulates” at http://tinyurl.com/zkgu33j to understand the FCC’s failures and why parents, teachers and schools need to investigate the risks of wireless technologies for themselves. The FCC is failing as a regulatory agency.
Ms. McDonald has now been brought up on disciplinary matters by the school related to her concern that student’s privacy rights are being violated by the data required to be submitted online for the PARCC test, and she faces potential firing at the end of the school year, ostensibly due to that issue, not because of her concern about wireless exposures at the school. Many believe she is being retaliated against because she has nobly persisted in raising an uncomfortable subject for the school in the interests of North Kingstown students, faculty and administrators. 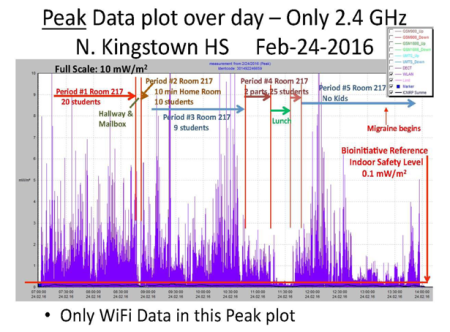 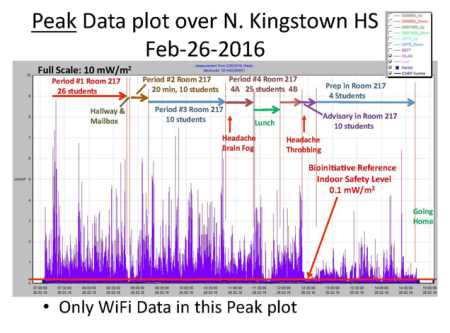 North Kingston High School Wi-Fi Data Plot Graph
** Note, the BioInitiative guideline used for reference here is the original 2007 BioInitiative recommendation for indoor continuous exposures of 0.1 mW/m2 (or 100 uW/ m2). The 2012 guideline is significantly lower than the 2007 recommendation, but the 2007 guideline is used here as it is considered to be more achievable.
What we learn from plotting the exposures at N. Kingstown H.S. is:
Also of note:
“Is the convenience of wireless delivery of the internet really worth risking our children’s health? N. Kingstown High School has wired internet installed and we should be using it, not wireless. It is everyone’s responsibility to advocate for the health and safety of our children.” – Math teacher Shelley McDonald
The concern voiced by Ms. McDonald and many other teachers, parents and administrators across the world about risks from wireless technologies in schools will be getting much more attention given an article published in IEEE Power Electronics Magazine (March 2016) showing weak magnetic fields can promote cancer by two esteemed scientists. The paper “Some Effects of Weak Magnetic Fields on Biological Systems: RF fields can change radical concentrations and cancer cell growth rates,” was authored by Distinguished Professor Frank Barnes in the Electrical, Computer and Energy Engineering Department at University of Colorado, and Ben Greenbaum, Professor Emeritus of Physics at University of Wisconsin-Parkside. (See Microwave News, March 18, 2016, http://microwavenews.com/short-takes-archive/barnes-greenebaum-weak-field-effects). The paper’s conclusions are consistent with the concern of over 220 international scientists who appealed to the United Nations last year (http://tinyurl.com/nlzxja6), and with the WHO’s classification of Radiofrequency radiation from cell phones and wireless technologies as a Group 2B ‘Possible Carcinogen’ in 2011 (http://tinyurl.com/o2dvt98 ). That classification will need to be updated.

Last Fall, we contributed a list, 10 Elements of an Electromagnetically Clean and Conscious School, for an article in Boston Parents, “Is WiFi Safe In Schools?”, and recommend them here for N. Kingstown High School: