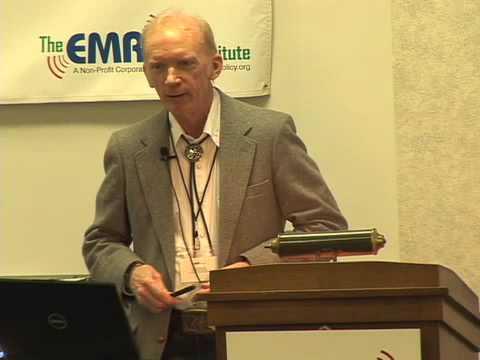 Excerpted from An Electronic Silent Spring

I have Parkinson’s Disease. In 2009, I had a Deep Brain Stimulator (DBS) implanted in my brain. It completely replaces the pharmaceuticals I took for fifteen years, which caused increasingly unpleasant side effects. My Medtronics manual says that a cell phone must be at least 20 inches away from me with a SAR of no more than 1.8. Held near my head, the phone’s SAR can’t be more than 0.25 for 15 minutes. Otherwise, according to Medtronics, it will cause dangerous heating of my implant. If the implant gets too hot, it will malfunction, my brain could be injured, or I could die.

The Medtronic manual for my deep brain stimulator (implanted to ease effects of Parkinson’s) lists more than sixteen pages of potential electro-magnetic interferences. I have experienced interference with the operation and programming of my medical implant in elevators, on large commercial aircraft, at malls, libraries, government buildings and other places with security systems. Because interferences are almost everywhere, I built a monitor to carry around and warn me of potential hazards to avoid, including security and inventory control systems, Wi-Fi, “smart” meters, cell and radio/TV towers, wireless phones and wireless devices, buildings with faulty wiring, light dimmers, certain appliances, and many more.

If I walk through a security system–like the ones commonly found in retail stores, airports, government buildings or in the library at the university where I teach – my DBS sometimes shuts off. I have four seconds to reset it or I shake so badly that I am unable to reset it without help.

The National Institute of Health estimates that twenty-five million Americans now have implanted medical devices. Besides brain stimulators, the functioning of cardiac pacemakers, insulin pumps, cochlear implants and bone stimulators can also be disturbed by RF signals. A disabled person’s getting x-rayed while sitting in a metal wheelchair can be especially dangerous.

A friend with an insulin pump has to shut it off when he flies, because his pump interferes with the plane’s avionics, and they interfere with his pump. This limits how far he can travel. A former student told me that if she’s around several people using cell phones, her insulin pump malfunctions.

After another friend with a brain stimulator and a pacemaker had a cochlear implant installed, the signals from his implants interfered with each other. Each device functioned inappropriately, and he experienced tremendous discomfort. The surgeons who installed the devices suggested that his home’s electrical system was the source of his trouble. They did not believe that implants could interfere with each other. They can. Unfortunately, medical implants are not regulated for such interference; and my friend – who is an MD – had to prove to his physicians that they were causing him trouble.

Recently, at a meeting of people with brain stimulators for Parkinson’s, I asked if any of their implants shut off when they walk through security doors at malls and other places. Fifty people were in the room. Everyone raised a hand.

But no agency studies the effects of radiofrequency signals on medical implants. Even doctors who implant devices are likely unaware of the problems – though implant manufacturers typically alert patients to pages of dangers in their manuals.

Despite the fact that ten percent of Americans (more than twenty-five million people) have a medical implant, no agency studies their experience around wireless devices. Many of these people may find their implant malfunctioning (including shutting off) if they board an airplane, share an elevator with a mobile phone user, or step through a security door at a library or a mall. No agency studies the interference that may occur between devices when a cochlear implant is installed in a person who already has a deep brain stimulator and a pacemaker.

We need to broaden public awareness about the vulnerability of people with medical implants. We also need regulation that will limit electromagnetic emissions. We need to create limits around “second-hand” exposure to electromagnetic radiation since, for example, being in a metal-walled elevator with a person who is using a mobile phone can be especially hazardous for people with implants. At a minimum, stores and other places with security and Wi-Fi devices (now often not visible but hidden behind walls) should post warnings that a potential hazard exists for people with implanted medical devices and Radiofrequency Sickness.

Such warnings could be modeled after those the FDA began requiring of microwave oven manufacturers in the 1970s. They alerted people with cardiac pacemakers that the oven could leak radiation and create a potential hazard. The FDA still regulates microwave ovens, and most of them leak less radiation than most cell phones. All mobile phones are currently allowed to leak higher SARs than microwave ovens.

I never thought an RF signal would be so harmful. It's so scrary Puzzle jigsaw