Canadians are calling on building professionals to reduce their EMF exposure 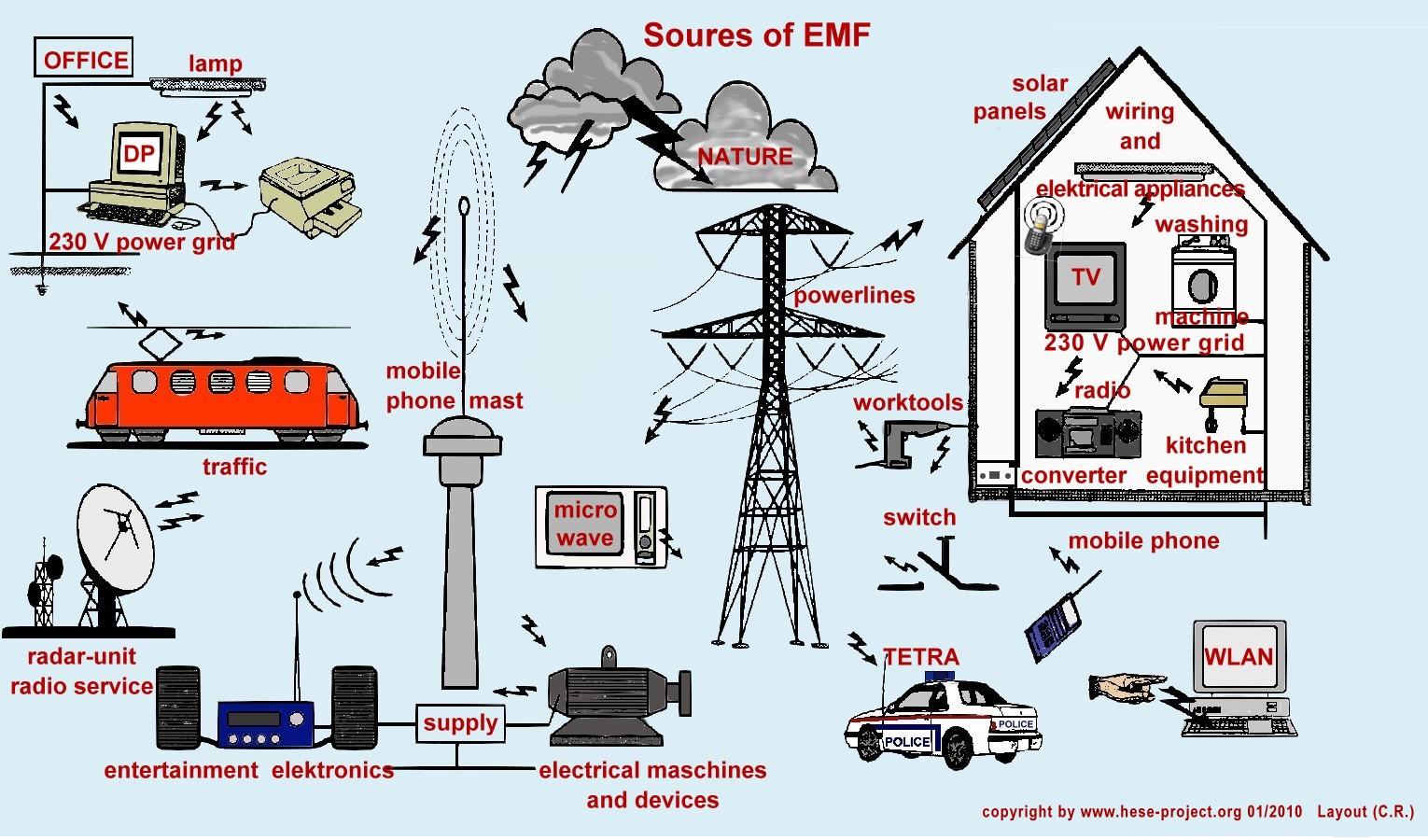 When leukemia struck Christian Groulx's three-year-old son, Ylan, in 2007, it rattled the Quebec builder's outlook on life. Luckily, Ylan was cured and Groulx was transformed right down to his building practices. That's because he learned that electromagnetic fields (EMFs) produced by power lines, electric appliances and home wiring are among the suspected triggers of leukemia and brain cancer, especially in children. In fact, electrical code violations are the major cause of EMFs.

"I decided to investigate EMF health effects in detail to see how I could reduce their impacts on my family and my clients," said Groulx, co-owner of Eastman-based Habitations Kyo.
Why Precaution Is Warranted
Electrosmog mitigation is a growing housing market as more and more Canadians are calling on building professionals to reduce their radiation exposure. Two types of domestic radiation are classified as "possibly carcinogenic" by the International Agency for Research on Cancer (IARC): 60 Hertz (Hz) magnetic fields, generated by current (amperage) when electricity is consumed, officially linked with greater risk of child leukemia in 2001; and radiofrequency (RF)/microwaves used by antennas and wireless devices, which IARC tied to brain cancer in 2011. (Electric fields created by voltage have not been classified by IARC.)
And in the age of wireless, "the number of diagnosed cases of electrohypersensitivity (EHS) has increased dramatically in the last 10 years," according to Dr. Riina Bray, Medical Director of the Environmental Health Clinic at Women's College Hospital in Toronto. As many as 3 per cent of Canadians are complaining of severe headaches, insomnia, heart palpitations and other acute EHS symptoms not linked to any disease and which regress when RF exposure is reduced, often without people's knowledge.
But the science is inconclusive, so Health Canada says precautionary measures are not needed to reduce daily EMF exposures. Yet thousands of independently funded studies (see bioinitiative.org) and hundreds of experts (emfscientist.org) suggest otherwise. High EMFs can notably hamper the body's nighttime healing mechanisms. Builders, renovators and electricians have an important role to play in helping reduce their clients' unnecessary EMF exposure, often with no-cost or low-cost measures. This introductory article will focus solely on 60 Hz magnetic fields.
Start by Measuring
How can building professionals stand out? "In existing housing, many constraints warrant hiring a consultant to measure EMFs, pinpoint problems and recommend solutions," said Christian Groulx. "In new housing, it's pretty simple if you follow a few basic rules."
The first thing to do is to buy a quality meter, such as the Cornet ED-78S EMF/RF detector, which costs $155 (at www.slt.co). IARC said children chronically exposed to magnetic fields above 4 milligauss (mG) or 0.4 microtesla (µT) double their relative risk of leukemia. And kids with leukemia have a poorer survival rate if they are exposed to fields above 1-3 mG (0.1-0.3 µT). Paradoxically, Health Canada says short-term exposures to 833 mG (83.3 µT) fields are acceptable to prevent acute effects such as nerve and muscle stimulation, but it does not consider long-term risks such as cancer. For its part, the Austrian Medical Association says chronic exposures above 1 mG (0.1 µT) are unacceptable.

The most common wiring error is to connect the neutrals from two different circuits, which happen to be sharing a box like a wall switch box with multiple switches, according to Karl Riley. Returning neutral current from one circuit then goes back on both neutrals (paralleling), unbalancing the cable and generating a magnetic field. This is a code violation as is grounding neutral buses in subpanels, but is commonly done out of both ignorance and convenience by many electricians.

Photo: Karl Riley/Magnetic Sciences
Wiring Errors the Major Culprit
Living close to a power line, using electric heating and outdated knob-and-tube wiring, and living in multifamily housing are common sources of high magnetic fields. However, about 70 per cent of the time, the most common cause is living in a home with wiring errors, and/or code violations that present fire and shock hazards, says American consultant Karl Riley, author of the bestselling guide, Tracing EMFs in Building Wiring and Grounding.
"Elevated magnetic fields in buildings are caused mainly by net currents in unbalanced circuits, meaning some of the neutral return current has been diverted to other paths due to common wiring connection errors," explained Riley. "It can also be caused by neutral current splitting and part of it exiting the building through the grounding conductor to the metal water pipes which present a parallel path for neutral current to return to the transformer."
This is why Christian Groulx prefers plastic plumbing as it is non-conductive and grounds the electrical system on two buried metal rods. In existing housing, replacing a section of the water service pipe with plastic pipe or dielectric (brass and plastic) coupling stops the flow of neutral current (and its magnetic field) throughout the house.
Energy Efficiency and Distance Key
Since magnetic fields are generated by current, reducing power use will reduce their intensity. And by balancing the amount of current circulating on nearby cables, their magnetic fields cancel each other out. That's why twisted pairs are now used in most radiant electric heating cables instead of single conductors (like knob-and-tube wiring). "If the wiring is correct (neutral equals hot current, hence cancels fields)," explained Riley, "then inches away achieves under 1 mG, but if there is a wiring connection error, three feet away could still have you in 3+ mG. However, too many factors are involved to recommend safe distances from power lines and wiring."
Ideally, site building and bedrooms as far away as possible from power lines. The service drop should be underground and perpendicular to structure, and electrical panels should be at least 6 to 10 feet from sleep and work areas, advises British Columbia consultant Chris Anderson of ElectroSmog Solutions. Riley adds that DC power does not induce currents in people and objects and that pure sine-wave inverters for alternative energy systems also produce less EMFs.
Magnetic fields travel through building materials. "Net current from wiring errors is unshieldable and drops off slowly with distance," said Riley. "As for magnetic fields from correctly wired sources, they can only be shielded with expensive ferrous metals, such as in MuMetal shielding. Appliances produce fields based on their containing coils of wire and weaken fast, with the cube of the distance. For example, a microwave oven produces a field from the wires of its transformer, usually under 1 mG at 1 meter."

More and more people with electrohypersensitivity are leaving cities to live in the countryside away from high EMFs, such as this group in France showing their medical certificates confirming their diagnosis.

Photo: next-up.org
Shielding Electric Fields
Finally, home wiring and plugged appliances always produce electric fields because of tension (voltage), present even when appliances are turned off. But, according to Riley, if installed according to Code, regular Loomex cable won't expose you to high electric fields. However more sensitive people such as children may react to very low levels, which is why Chris Anderson recommends hydronic heating instead of heating cables.
"It's best to use short back-and-forth wiring runs than creating loops around beds," said Groulx. The good news is that electric fields are easily shielded with armored cable, which Chris Anderson prefers where people spend time, especially bedrooms. "Since we are up to 100 times more vulnerable to any stress when we sleep and metal acts as an antenna, avoid placing bedrooms over garages and workspaces, or having metallic components under and near bed sites."
Concludes Riley, "Those rare people who are hypersensitive to electric fields will need a whole house with armored cable, and the cords and extension cords to all lights and appliances will also have to be shielded."